You are here: Home1 / Spa and railway

A 7 km walk with options for taking short cuts back to Graianfryn, fairly level and sheltered, a good easy option for a windy day. Allow two hours.

Walk through the farm gates adjoining Graianfryn and along the track through Blaen Cae Isaf Farm past the farm buildings and house. Carry straight on along the track round the bend to the left and then there is a stile on the left where the main track curves to the right, climb over it (see photo below) and walk straight on along the vague path which soon becomes more distinct. The track is initially bordered by a wood on the left and a stream on the right, then by a broken down stone wall on the right. 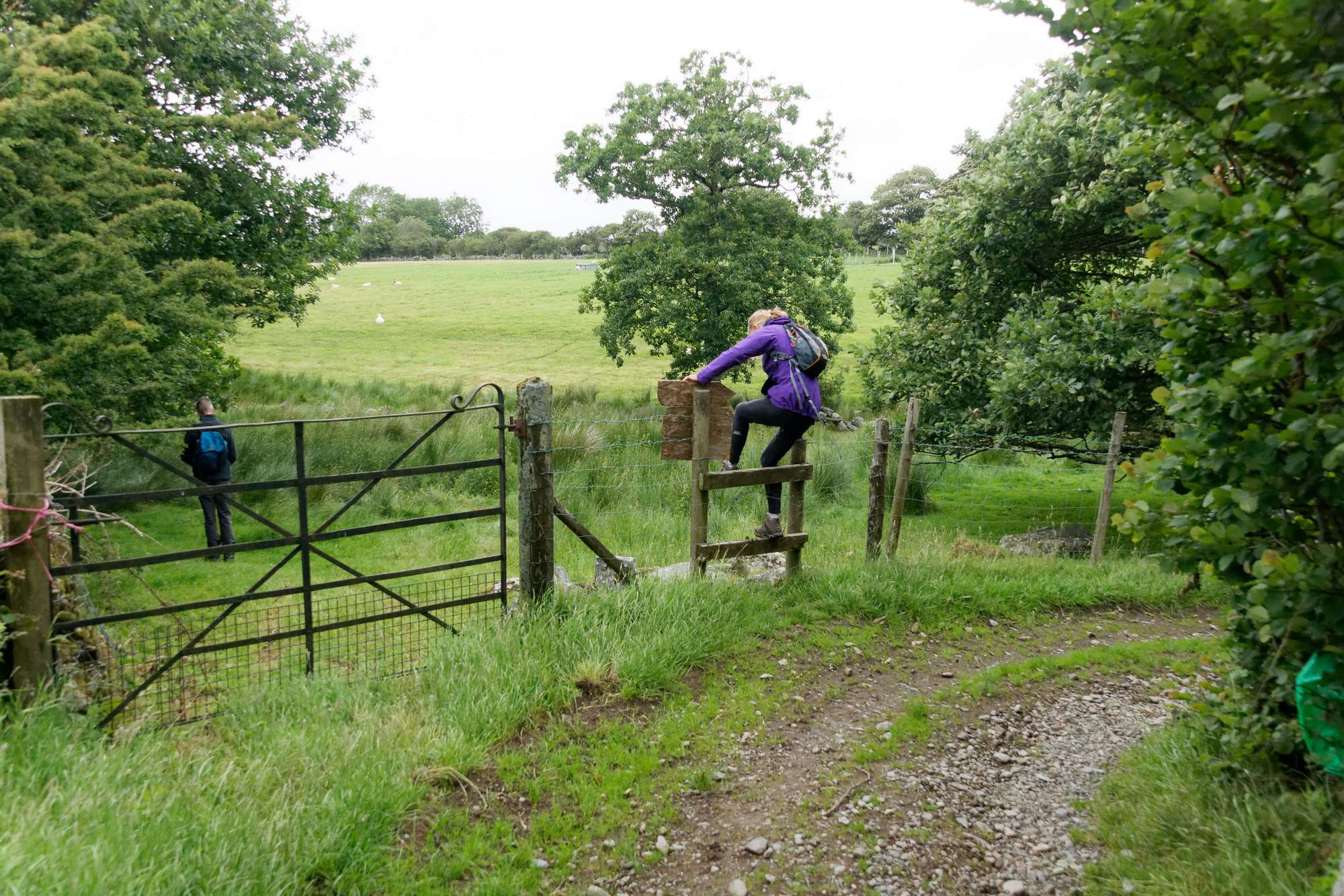 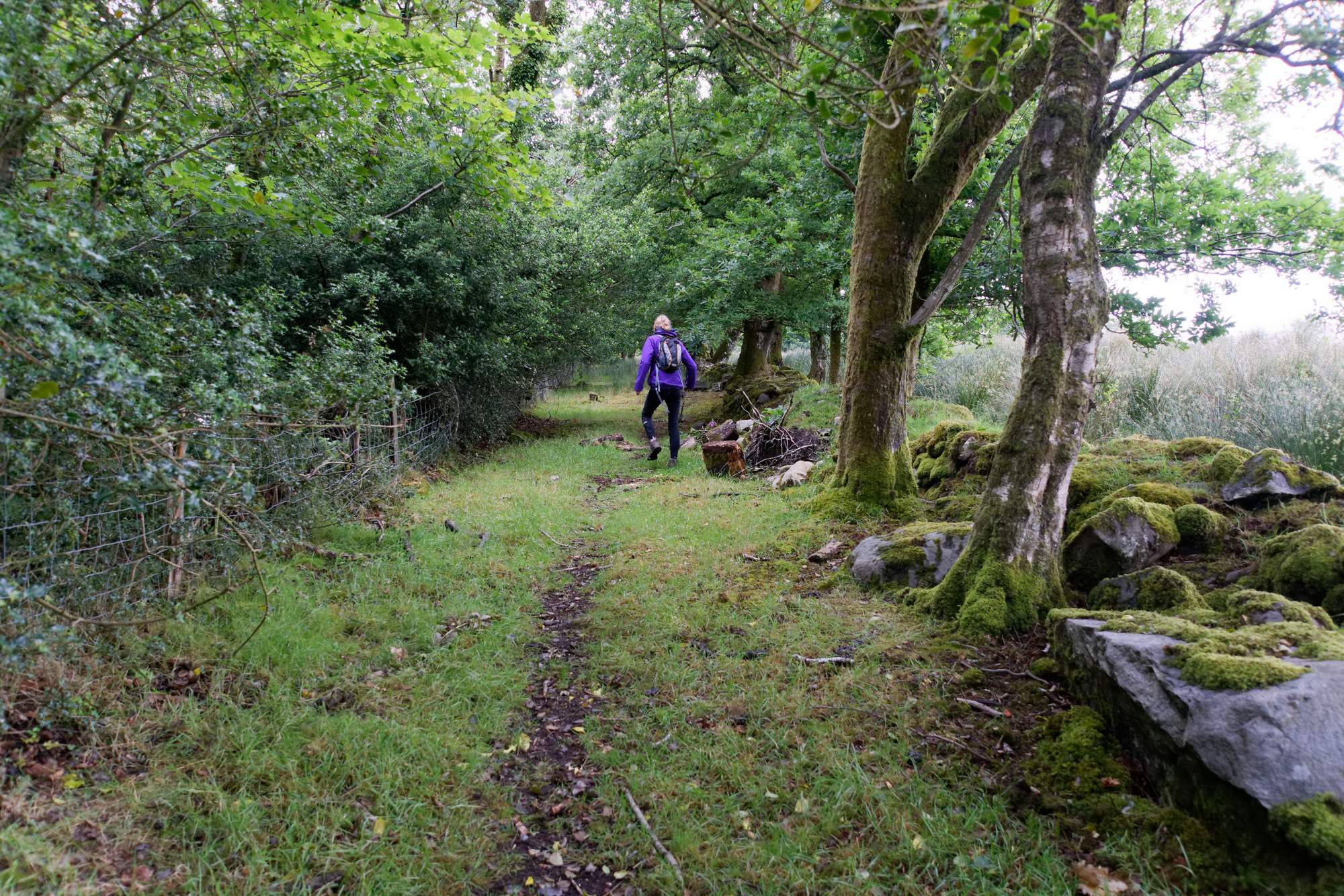 Ignore the first stile to the left along this track, which can be wet in places, and continue straight ahead and near the end of the track is a stile on the left. Take this (photo below) and follow a meandering path on the right through woodland and over a couple of sleeper bridges which cross streams. You may have to navigate past the occasional fallen tree. You will leave the woodland and keep on along the path with tall shrubs on either side. Eventually you reach a broad track, carry on straight ahead across it over a stile and through a gate.

A group of trees by an electricity pylon betray the site of Fynnon Cegin Arthur. The existence of chalybeate water here was known from the sixteenth century, although when Thomas Pennant visited in the late eighteenth century its use had declined. A local doctor practicing in London who had used the water to treat a number of his patients, published a booklet, the popularity of the spring grew, and for a short while a new industry grew up around it. Maps from the late Victorian period show an array of buildings around the well that may have been used to accommodate visitors and bathers, and also bottling of the water for sale. The nearby Y Felinheli (Port Dinorwic) railway station on the Bangor to Caernarfon line which opened in 1852 provided improved visitor access to the site. All that remains is a few broken down walls and the site has been reclaimed by nature (photo below). 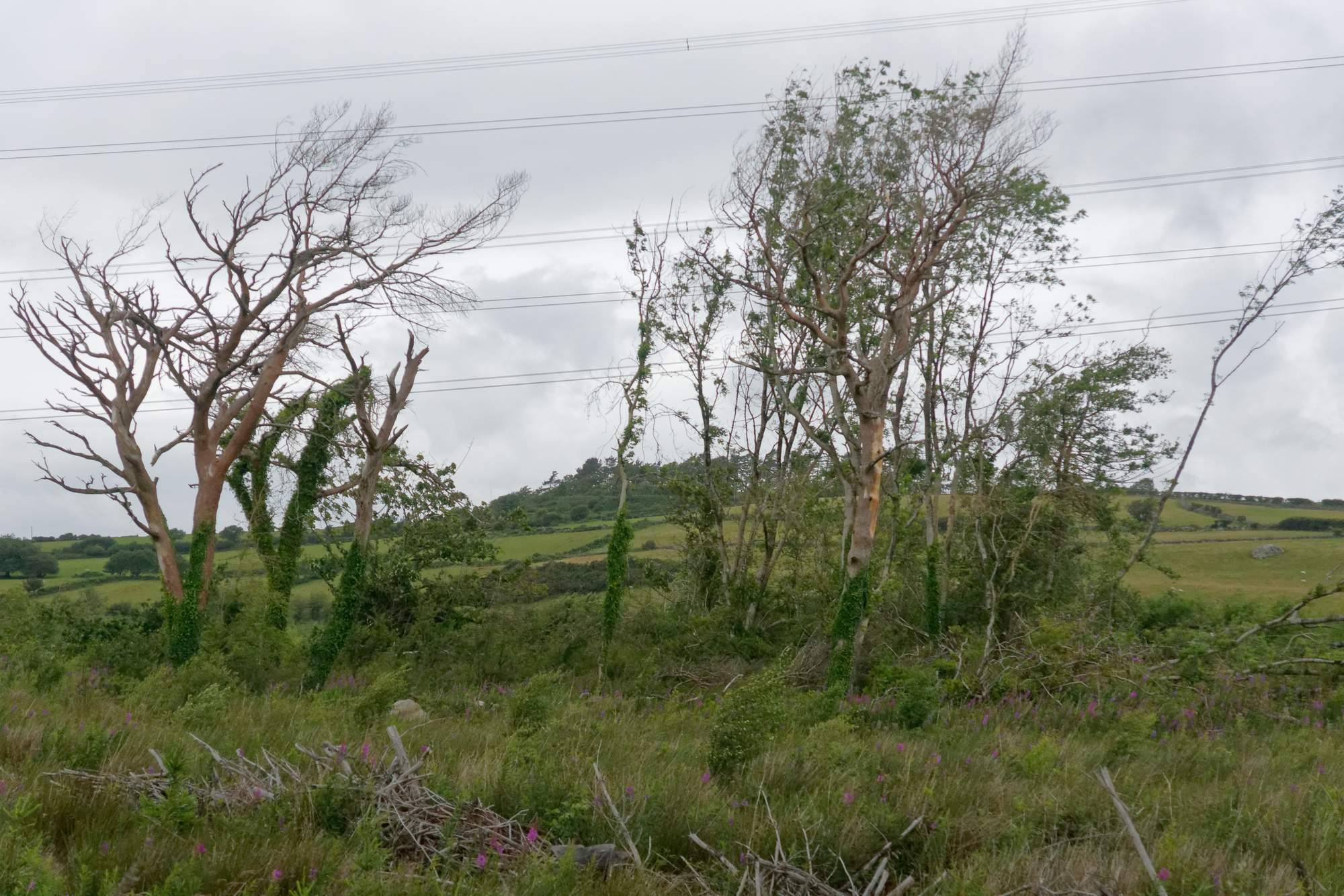 Continue along the track until you reach a road, turn left and then bear left at the junction signposted Penisarwaun. You’ll first pass through the hamlet of Waun then reach a crossroads in Penisarwaun. Go straight across, passing the former village school on your left. The road rises but you will soon drop down to your right along one of the paths (see photo below) which provided a short cut for quarrymen between the village and the Stabla station on the privately owned Padarn railway which served the Dinorwig slate quarry. 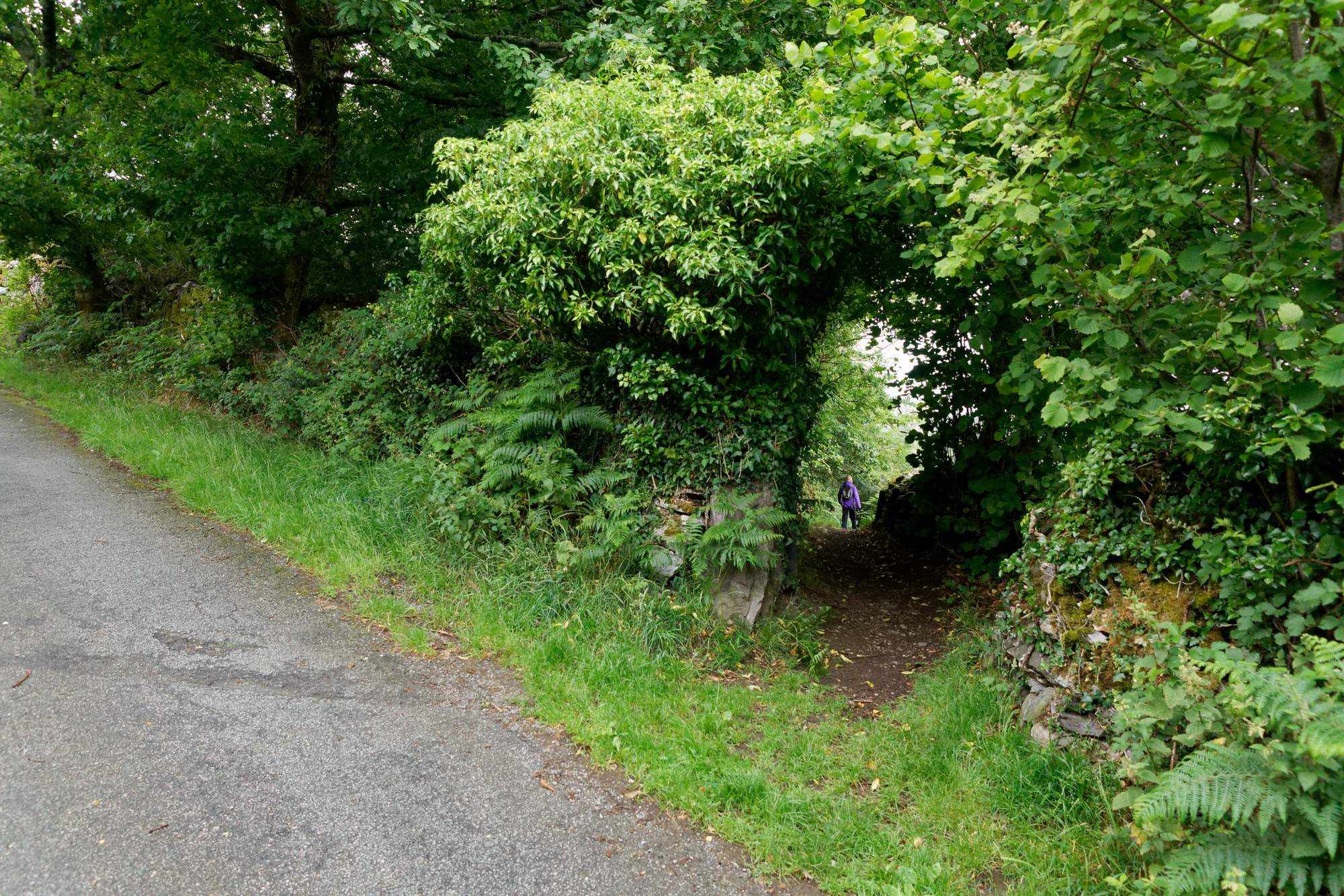 At the bottom of the path is a row of houses known as Stabla, developed to house workers who worked in the railway stables. For some years after the construction of the railway in 1842, horses used to haul slate trains from Dinorwig Quarry to the port at Felinheli. These were quartered in stables in this yard. We turn left here but you can walk a short way to the right to first view the derelict carriage sheds for the railway if you wish.

At the end of the road, walk through a gate along the trackbed of the old railway, which closed in 1961, a few years before the closure of the quarry. A footpath runs alongside, separated from the line by a slate fence but redundant now. 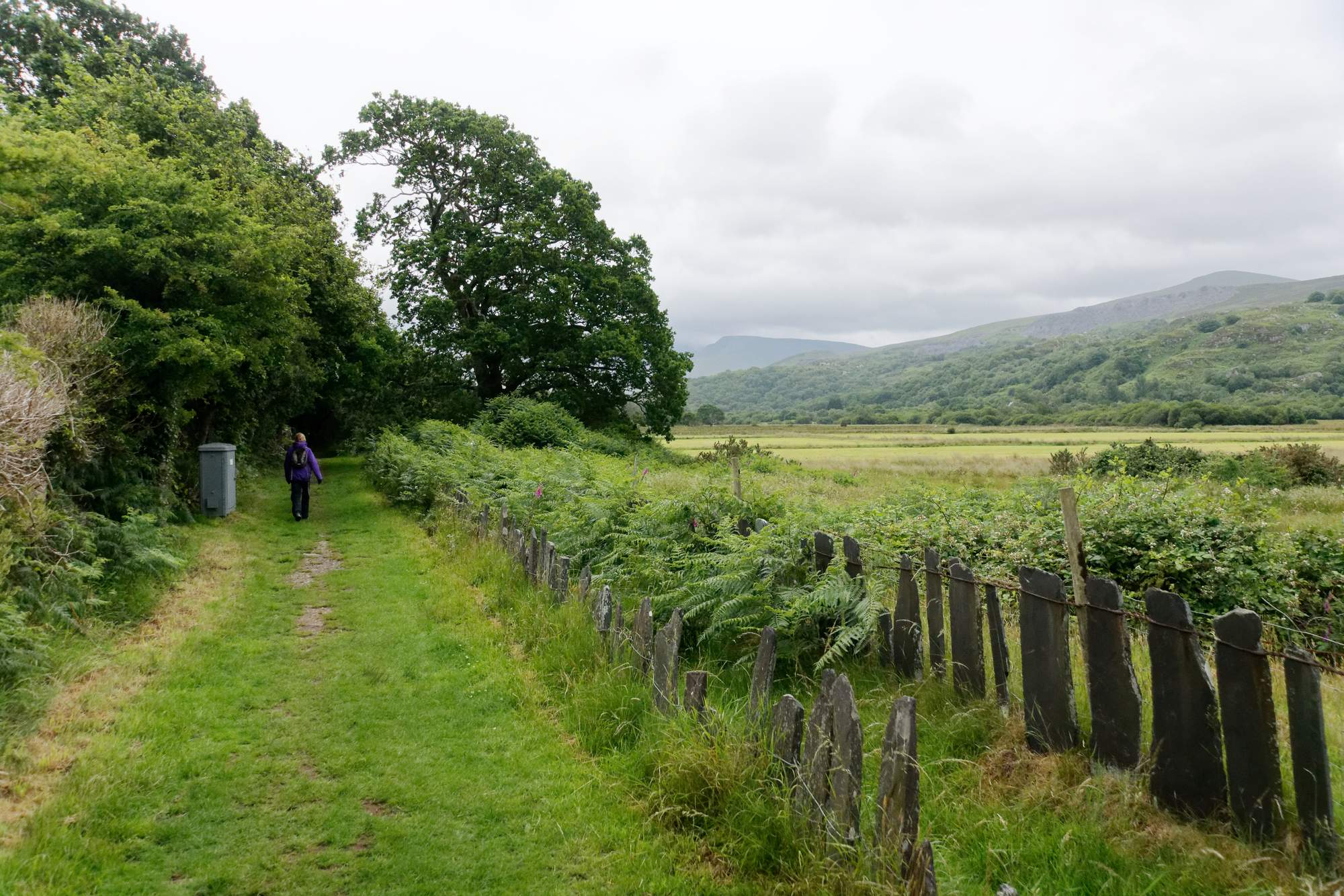 You’ll pass through a cutting and then emerge onto a road which brings you to the A4244. Cross with care and walk along the road to the left of a small industrial compound which winds past an enormous rock to the village of Brynrefail. Turn left and walk through the village, the Caban café is a good place for lunch or cake. At the A4244 junction, turn right along the multi-use path and back to Graianfryn.

You can extend the walk by turning right in Brynrefail and walking round Llyn Padarn, this would add another two hours to the length.